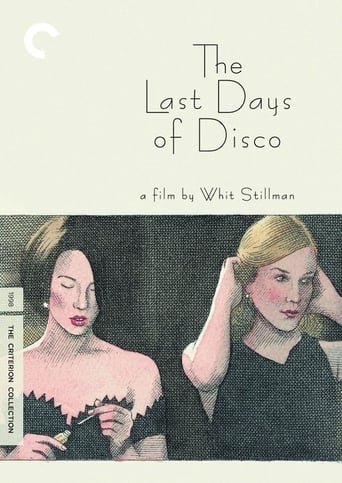 Rosalio Galvan over 4 years ago
groove

Seth Oldmixon 5 years ago
To thine own self be true.

Jim Barton almost 6 years ago
Yep, Disco sucks and so does this movie.

Ben Askins 7 years ago
Rewatched for the nth time! Film making doesn't get any finer.

Renard Bansale over 7 years ago
Really engaging without getting too disco-y. Great script, characters, and music!!

Tom Rowlingson over 5 years ago

Ronald Feichtmeir over 6 years ago

EJ Strauss over 6 years ago

Anson Parker almost 8 years ago
The Last Days of Disco is a 1998 sardonic comedy-drama film written and directed by Whit Stillman and loosely based on his travels and experiences in various nightclubs in Manhattan, including Studio 54. The film concerns a group of Ivy League and Hampshire graduates falling in and out of love in the disco scene of Manhattan in the "very early 1980s". Chloë Sevigny and Kate Beckinsale have the lead roles. The Last Days of Disco is the third film in what Stillman calls his "Doomed-Bourgeois-in-Love series", which begins with Metropolitan and continues with Barcelona. According to Stillman, the idea for The Last Days of Disco was originally conceived after the shooting of disco scenes in Barcelona. In 2000, Stillman published a part-novelization of the film, titled The Last Days of Disco, with Cocktails at Petrossian Afterwards. The film was released theatrically in the United States on May 29, 1998, and its DVD and video releases followed in 1999. The DVD releases eventually went out...
Read more on