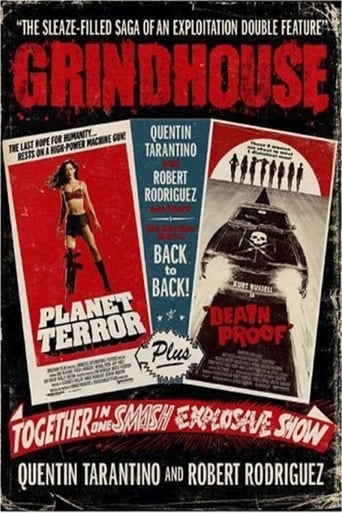 Eric Brainard over 1 year ago
I was excited for this release, I wasn't disappointed. I like Planet Terror a little more.

Noah Rymer 4 years ago
a fantastic homage to the genre, watching it as a double feature is a must.

ashley lee over 5 years ago
Planet Terror was so damn good that I was actually embarrassed for Death Proof.

Carl Watson over 6 years ago
Planet was great, the preview trailers were beyond outstanding, DeathProof needed to die.

Godzi Freeman Rockzila over 6 years ago
these films are amazing, full of unforgettable moments

David Edge over 7 years ago
I thought it was so awesome! It was definitely an experience to watch.

Esther Espadas Rodríguez over 2 years ago