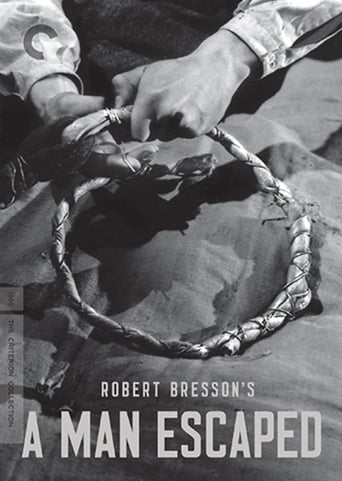 Jean Walton 2 years ago
You will never look at a spoon the same way again. Minimalist cinema at its best.

Austin 6 years ago
An economically constructed masterpiece, suspenseful throughout despite its title.

Jim Barton over 6 years ago

Dániel Rudolf over 7 years ago
A Man Escaped or: The Wind Bloweth Where It Listeth (French: Un condamné à mort s'est échappé ou Le vent souffle où il veut) is a 1956 French film directed by Robert Bresson. It is based on the memoirs of André Devigny, a prisoner of war held at Fort Montluc during World War II. The protagonist of the film is called Fontaine. The second part of the title comes from the Bible, John 3:8, and in English it is worded this way only in the Authorized King James Version (more recent translations using words like "wants" (which is the title in French) or "pleases" instead of "listeth"). Bresson, like Devigny and the character Fontaine, was imprisoned by Nazis as a member of the French Resistance. The soundtrack uses Mozart's Great Mass in C minor, K. 427. The film was entered into the 1957 Cannes Film Festival. After the establishing shot of Montluc prison, but before the opening credits, the camera rests on a plaque commemorating the 7,000 men who died there at the hands of the Nazis. On the...
Read more on