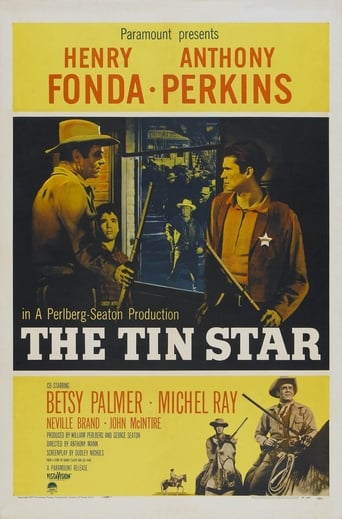 jvol over 5 years ago
The Tin Star was first a short story then a movie American western film directed by Anthony Mann and starring Henry Fonda and Anthony Perkins, in one of Perkins' first roles. The film became one of the few low budget westerns to be nominated for the Academy Award for Best Writing, Story or Screenplay. Since its release, the film has become one of the classics of the genre. Universally disdained, bounty hunter Morgan Hickman (Henry Fonda) arrives in a small town with a dead outlaw in tow. While the town's population openly abhors Hickman, young sheriff Ben Owens (Anthony Perkins) admires the man for taking everything in stride and knowing how to handle dangerous situations. When Owens learns Hickman was once a sheriff himself, he convinces Hickman to teach him the ways of a lawman, forcing Hickman to face his past and lost virtues.
Read more on