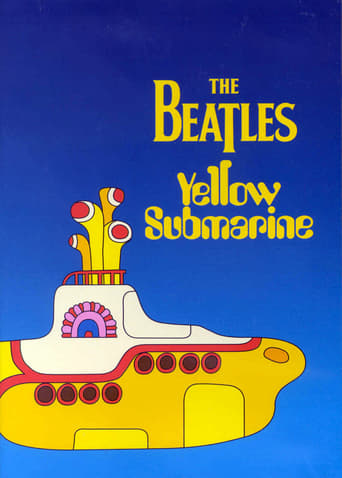 Thomas Jennings 6 years ago
It's all in the mind, you know.

Jill Barsby over 7 years ago
Amazing journey through time and space to save a small group of natives from blue dangers.

Kenneth Chisholm over 7 years ago
A tuneful and boldly imaginative Beatles fantasy with the band at its finest.

Dylan Clites over 7 years ago
Fans will enjoy this quite a bit. Non-fans will wonder what all of the hubbub is about.

Davide MrBlonde over 4 years ago

Bloc Silent over 4 years ago

Fernando Studzinski over 4 years ago

frank mint 5 years ago
Yellow Submarine is a 1968 animated musical fantasy film based on the music of The Beatles. It is also the title for the film's soundtrack album, released as part of The Beatles' music catalogue. The film was directed by animation producer George Dunning, and produced by United Artists (UA) and King Features Syndicate. The real Beatles participated only in the closing scene of the film, with the fictional counterparts of The Beatles voiced by other actors. The film received a widely positive reception from critics and audiences alike. It is also credited with bringing more interest in animation as a serious art form. Time commented that it "turned into a smash hit, delighting adolescents and esthetes alike". In the beginning of the story, Pepperland is introduced by a narrator as a cheerful music-loving paradise under the sea, protected by Sgt. Pepper's Lonely Hearts Club Band. A yellow submarine rests on a somewhat Aztec-like pyramid on a hill. At the edge of the land is a range of...
Read more on