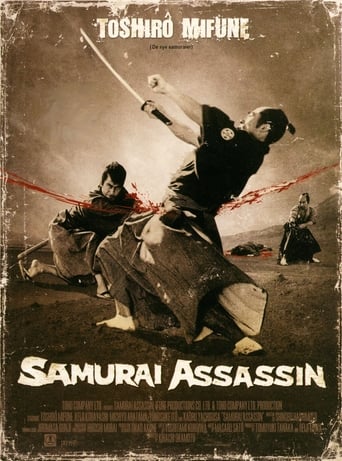 Varun 9 years ago
Samurai Assassin (侍, Samurai ) is a 1965 Japanese movie directed by Kihachi Okamoto and starring Toshirō Mifune, Koshiro Matsumoto, Yunosuke Ito, and Michiyo Aratama. Samurai Assassin is set in 1860, immediately before the Meiji Restoration changed Japanese society forever by doing away with the castes in society and reducing the position of the samurai class. It is a typical samurai movie, with lots of conversation, beautiful black-and-white photography and a swordfight at the end. This movie is rather quiet in as far as the main part of the action goes. The film tells the story of Niiro Tsurichiyo (Mifune) as the illegitimate son of a powerful nobleman, and the way of his life that made him a swordfighter but also a social outcast. The film is based on a novel, which in turn was inspired by a real event: the assassination of feudal lord Ii Naosuke outside the Sakurada Gate of Edo Castle.
Read more on