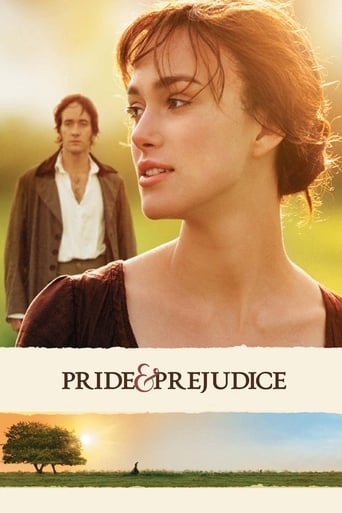 Cveti Kalcheva over 3 years ago
Best love story hand down! Macfadyen is superb as Darcy.

Ellimister Keck over 4 years ago
There are worse things to watch on Netflix to make others happy. They talk so fast

Alisha Effendi almost 5 years ago
I'm a wreck. This version will forever be my fave. Perfection.

Agus Echagüe 5 years ago
Chick flick, but a well done one.

Emma Flaherty over 5 years ago
An utterly captivating story. Both leading performances are breathtaking

Ester over 5 years ago
The 1995 BBC version is way better.

Jessica over 6 years ago
Wow, beautiful, beautiful movie. Love it, so sweet.

Taryn Chambers over 6 years ago
I will never tire of this film. Well acted, perfectly scored, and incredibly beautiful.

Sirine Khoury almost 7 years ago
One of my favorites. Can't get enough of it !

Ferşat Özçelik almost 7 years ago
i really love this. hasn't got a big philosophical subject but the story is so lovely.

Ay Lin almost 7 years ago
As a Jane Austen fan & admirer of the BBC TV series, I was very pleased with this version.
Pride & Prejudice is a 2005 British romance film directed by Joe Wright. It is a film adaptation of the 1813 novel of the same name by Jane Austen and the second adaption produced by Working Title Films. It was released on September 16, 2005, in the UK and on November 11, 2005, in the US. During the early 19th century, the Bennet family, consisting of Mr. and Mrs. Bennet and their five daughters—Jane, Elizabeth, Mary, Catherine "Kitty", and Lydia—live in comparative financial independence as gentry on a working farm in rural England. Longbourn is destined to be inherited by Mr. Bennet's cousin, Mr. Collins, Mrs. Bennet is anxious to marry off her five daughters before Mr. Bennet dies. However, Elizabeth, the heroine, is convinced that she should never marry unless she feels compelled to do so by true love. Mr. Bingley, a wealthy bachelor who has recently moved into Netherfield, a large house in the neighborhood, is introduced to local society at an assembly ball, along with his...
Read more on