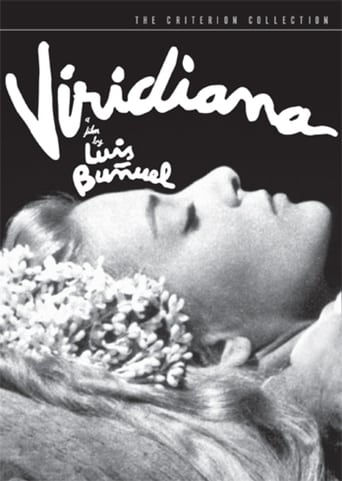 Austin almost 6 years ago
Certainly one of Bunuel's best films.

Olga Tsybulska over 5 years ago

Ale Márquez over 6 years ago

sophia pollari over 6 years ago

Germán Sabina Serrat over 7 years ago

Dániel Rudolf over 7 years ago
Viridiana is a 1961 Spanish-Mexican motion picture, directed by Luis Buñuel and produced by Mexican Gustavo Alatriste. It is loosely based on Halma, a novel by Benito Pérez Galdós. Viridiana was the winner of the Palme d'Or at the 1961 Cannes Film Festival. A young novice named Viridiana (Silvia Pinal) is about to take her vows when her uncle, Don Jaime (Fernando Rey), invites her to visit him. He is her only living relative, but she has only met him once and is reluctant to comply. Her Mother Superior pressures her into accepting. Don Jaime is a recluse, living on a neglected farm with only a couple of servants, Ramona (Margarita Lozano) and Moncho, and Ramona's daughter Rita. When Don Jaime sees his niece, he is struck by her strong resemblance to his deceased wife. The night before she is to leave, Viridiana, grateful for her uncle's longtime financial support, reluctantly complies with his odd request and puts on his wife's wedding dress. When Ramona informs Viridiana that Don...
Read more on