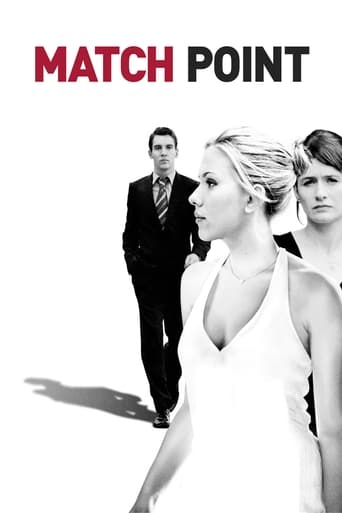 Kam-Hung Soh over 4 years ago
Woody Allen with a bit of bite on greed and lust.

Melissa Høegh Marcher over 5 years ago
I had a hard time figuring out the main character's motives. Very confusing.

Joshua Trigg 7 years ago
Frankly well worth a watch for Johansson's FINE... acting ability. -And bod.

sharon lekahena over 7 years ago
Love u Scarlet :')

John Barton almost 8 years ago
I could watch Scarlett Johansson get backrubs all day long.

Emma Dilemma almost 8 years ago
woulda been better if the much hyped 'ditch scene' was as good as it was described!

tal sheldon over 2 years ago

Milda over 3 years ago

Hannah Newman over 3 years ago

Sabrina almost 4 years ago
Match Point is a 2005 dramatic thriller film written and directed by Woody Allen, and starring Jonathan Rhys Meyers, Scarlett Johansson, Emily Mortimer, Matthew Goode, Brian Cox and Penelope Wilton. The film received critical acclaim, and was nominated for an Academy Award for Best Original Screenplay. Chris (Jonathan Rhys Meyers), a recently retired tennis pro, takes up a job as a tennis instructor at an upmarket London club. He strikes up a friendship with a wealthy pupil, Tom Hewett (Matthew Goode), after discovering a common affinity for opera. Tom's older sister, Chloe (Emily Mortimer), is smitten with Chris and the two begin dating. During a family gathering, Chris meets Tom's fiancée, Nola Rice (Scarlett Johansson), and they are instantly attracted to each other. Tom's mother Eleanor (Penelope Wilton) clearly does not approve of her son's relationship with a struggling American actress, a source of tension. Chloe encourages her father to give Chris a job as an executive in one...
Read more on