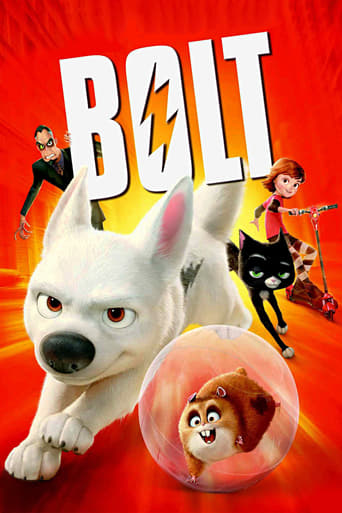 Leif Jacobson 4 years ago
A really enjoyable Disney flick. Though Rhino was pretty grating, I thought.

Johnny Nys 4 years ago
Excellent movie! Only a big disappointment 10 minutes in when it turns out he's not real.

Michael Cole over 4 years ago
A nice Homeward Bound feel

Lizzie almost 6 years ago
Surprisingly hilarious, from what I remember.

Jordan Feurstein 6 years ago
Fun, cute family movie. Enough good chuckles (thanks to the hamster) to keep this lively.

Randi Steers 6 years ago
An endearing film that beautifully portrays the bond between a girl and her dog. I cried.

Superwhomerlock666 over 6 years ago
Cute Family Movie but the big finale wasn't what I expected.

bethswald over 6 years ago
Tolerable but forgettable family movie

Dylan Clites over 7 years ago
Passable Disney movie with over the top characters, decent animation, and crap voiceovers.

Giorgia 1 year ago
Bolt tells the story of a dog who is convinced that his role as a super dog is reality. When he is ripped from his world of fantasy, and action by his own doing. His own obsession with his owner and keeping her protected from the green eyed man of the television show he works on completely absorbs his life. This takes him to the point of no return when he believes that she has been kidnapped, and he accidentally gets packaged and shipped to New York city in pursuit of his owner. This is when the story unfolds, and he goes through a transitional period where he learns that he is as super as every other dog. His disbelief of his abilities being non existent fuels a lot of different emotional changes, and eventually comes to a reality of who he really is. This all culminates when he finds his owner and reunites with her in the action packed climax of the movie.
Read more on