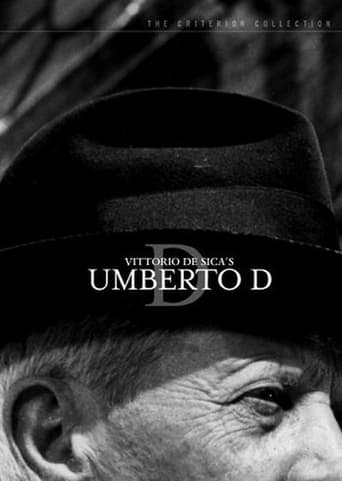 - +
Rate this film
Add a review
Delete Rating/Review Share Add to queue
In your queue
Remove it
Umberto D. 1952

Robyn Hamilton almost 7 years ago
A poignant comment on the fate of the elderly. Very moving.

Matteo Satta over 1 year ago

S over 6 years ago

Todd Anderson over 6 years ago

Jeff Mendoza over 8 years ago
Umberto D. is a 1952 Italian neorealist film, directed by Vittorio de Sica. Most of the actors were non-professional, including Carlo Battisti, who plays the title role. It tells the story of Umberto Domenico Ferrari (Carlo Battisti), an old man in Rome who is desperately trying to keep his room on a small state pension, but whose landlady (Lina Gennari) is expecting to drive him out to fit her social lifestyle. He tries to find the money but is unable to beg to his richer friends, and cannot be helped by his only true friends, a maid (Maria-Pia Casilio) and his dog, Flike (called 'Flag' in some subtitled versions of the film). The movie was in the "Time Magazine's All-Time 100 Movies" in 2005. The film begins with a march of elderly men for the raising of pensions which is quickly stopped by the police because the men had no permit to march. The crowd files out of the square, still muttering their protests, with the camera eventually focusing in on one of the marchers, Umberto D....
Read more on