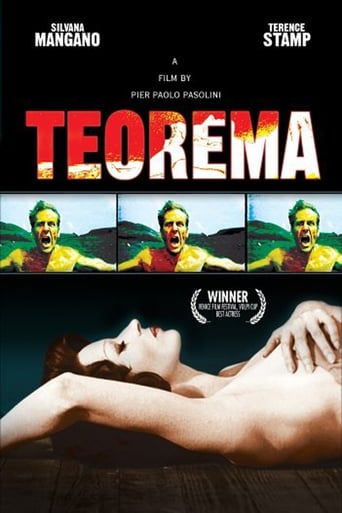 Davide Ariasso over 5 years ago
P.'s investigation into the impossibility of sacredness within bourgeoise's boundaries

Sam Bowman over 2 years ago

Dániel Rudolf over 7 years ago
Teorema (1968) is an Italian language movie directed by Pier Paolo Pasolini and starring Laura Betti, Silvana Mangano, Massimo Girotti, Terence Stamp, and Anne Wiazemsky. It was the first time Pasolini worked primarily with professional actors. In this film, an upper-class Milanese family is introduced to, and then abandoned by, a divine force. Two prevalent motifs are the desert and the timelessness of divinity. Terence Stamp plays a mysterious figure who appears in the lives of a typical bourgeois Italian family. He engages in sexual affairs with all members of the household: the devoutly religious maid, the sensitive son, the sexually repressed mother, the timid daughter and, finally, the tormented father. The stranger gives unstintingly of himself, asking nothing in return. Then one day he leaves, as suddenly and mysteriously as he came. The subsequent void created forces each family member to confront what was previously concealed by the trappings of bourgeois life. The mother...
Read more on