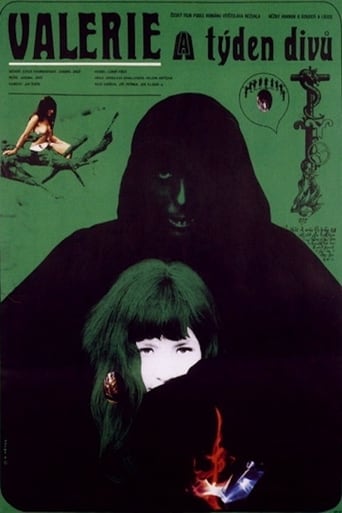 Rosalio Galvan over 4 years ago
pretty, quiet, but didn't quite get it

Austin almost 5 years ago
A film absolutely unlike any other - a dreamlike fairy tale.

Charlie Alcock 6 years ago
Dreamlike, poetic and ahead of its time. Vampires and incest abound.

Lino Monteiro almost 7 years ago
Maybe I'm just dumb but I really didn't get what this story was about. "Artsy" though.

Faith Cameletti over 3 years ago

Nino Vignjevic over 4 years ago

Marc Biskup almost 7 years ago
Valerie and Her Week of Wonders (Czech: Valerie a týden divů is a 1970 Czech film directed by Jaromil Jireš and based on the 1935 novel of the same name by Vítězslav Nezval. The 1970 film adaptation of Valerie a týden divů was shot in 1969 starring the then 13-year-old Jaroslava Schallerová as Valerie, with a supporting cast of Helena Anýžová, Karel Engel, Jan Klusák, Petr Kopriva, among others. It was filmed in the Czech town of Slavonice and surrounding areas. The film portrays the heroine as living in a disorienting dream, cajoled by priests, vampires, men and women alike. In January 2004 the film became available commercially in the US on the Facets Video label and in June that year the film was released on DVD in the UK by Redemption Films Ltd. In 2006 the film was officially released in the Czech Republic by label CÈV/Bonton. All three releases present the film in the aspect ratio of 1.33:1. Unlike the Facets and Redemption releases, the CÈV/Bonton DVD is not presented with...
Read more on