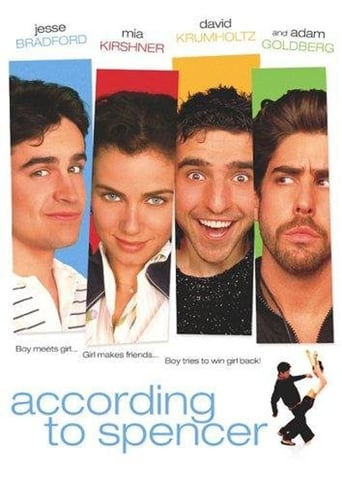 Jesse Bradford, Mia Kirshner, David Krumholtz, Adam Goldberg
Rate this film now
Write a short review
According to Spencer is a 2001 film starring Jesse Bradford, Mia Kirshner, David Krumholtz, Adam Goldberg, and Brad Rowe. The film is centered on Spencer (Bradford), who moves to Los Angeles and (literally) runs into Melora (Kirshner), the girl he's been in love with since he was a child. Spencer is plagued by many obstacles in his new life: winning the girl of his dreams, finding success in his new job, and dealing with his two ambiguously-oriented roommates (Krumholtz and Goldberg), who are obsessed with making a pornographic film and submitting it to what they believe is a contest. You can find it on YouTube @ http://www.youtube.com/watch?v=Z94XiGJ2mi8
Read more on