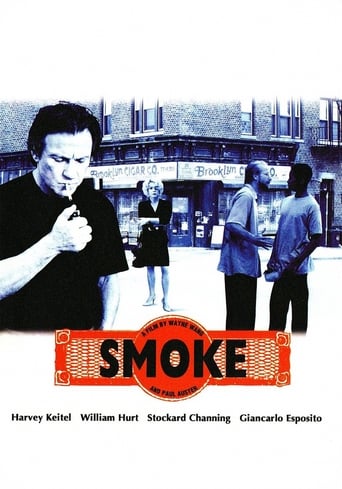 Tom o'brien over 5 years ago

Sam Bowman over 6 years ago

Lucy Avramova over 6 years ago

Stephane Pimienta over 7 years ago

Michael Morris over 7 years ago

Ed Wong over 7 years ago

Kosta Jotić over 7 years ago

Michael Kirk over 7 years ago
Smoke is an American independent film released in 1995. It was produced by Hisami Kuroiwa, Harvey Weinstein and Bob Weinstein and directed by Wayne Wang and Paul Auster (who also wrote the screenplay). Among others, it features Harvey Keitel, William Hurt, Victor Argo, Forest Whitaker, Ashley Judd, Stockard Channing and Harold Perrineau Jr.. The film follows the lives of multiple characters, all of whom are connected by their patronage of a small Brooklyn tobacco shop managed by Auggie (Harvey Keitel). Brooklyn Cigar Co. was located on the corner of 16th Street and Prospect Park West. The film was followed by Blue in the Face, a sequel of sorts that continues following a few of the characters and introduces several new ones. The film maintains a 93% average on Rotten Tomatoes. Won Nominated
Read more on