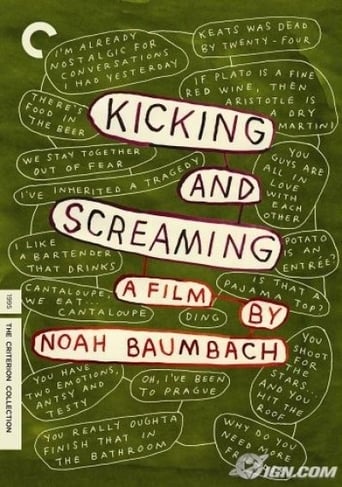 Aaron Jones over 2 years ago
Hilarious as a satire of liberal arts boys, and also heartrending as a tragicomic romance.

J.H. Howes over 6 years ago
I love this movie, and I love that I tend to be the only one that does.

heidijane over 6 years ago
Indie dude blowhards circa 1990s.

Lizzie 7 years ago
This was strange, for sure.

Seth Oldmixon over 5 years ago

Matteo Satta over 6 years ago

chloe matthews 7 years ago
Kicking and Screaming is a 1995 film by Noah Baumbach about a group of college graduates who refuse to move on with their lives, each in his own peculiar way. The film stars Josh Hamilton, Chris Eigeman, Carlos Jacott, and features Eric Stoltz, Olivia d'Abo and Parker Posey. It premiered in 1995 at the New York Film Festival to critical acclaim. Baumbach was chosen as one of Newsweek's "Ten New Faces of 1996". The film appeared in several "Top Ten" lists, and had a lengthy run playing on the Sundance Film Channel. The Criterion Collection DVD was released August 22, 2006 in the U.S., being one of the first few films to use the current Criterion logo. Much of the film was shot at Occidental College.
Read more on