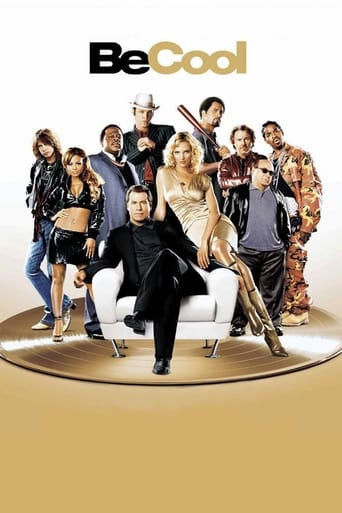 oscar diaz 4 years ago
Vince Vaughn should not be allowed to "act" again.

Gabi Lener over 5 years ago
Meh 1/3 of the scenes could have been skipped. An unnecessary sequel for an awesome movie

Robbie Crossfield over 6 years ago
Love his style

Rory Banks over 5 years ago

Edsel Dope over 6 years ago

Matthew Smith over 7 years ago

Brandon Foret over 7 years ago

Paul McCamley over 7 years ago

Robert Baker over 7 years ago

Ciaran Bourke over 7 years ago
Be Cool is a 2005 crime-comedy film adapted from Elmore Leonard's 1999 novel of the same name and the sequel to Leonard's 1990 novel Get Shorty (itself adapted into a hit 1995 film of the same name) about mobster Chili Palmer's entrance into the film industry. The film adaptation of Be Cool began production in 2003. It was directed by F. Gary Gray, produced by Danny DeVito (who produced and co-starred in the first film), and starred John Travolta, reprising his role from the first film. The movie opened in March 2005 to generally mixed reviews, and was released to video and DVD distribution on June 7, 2005. This was Robert Pastorelli's final film. He died before its theatrical release. Chili Palmer (John Travolta) helps Edie Athens (Uma Thurman), the widow of an executed friend, Tommy Athens (James Woods), to resurrect a record company using the talents of young and talented female vocalist and songwriter, Linda Moon (Christina Milian). The plot is complicated by several facts: Chili...
Read more on