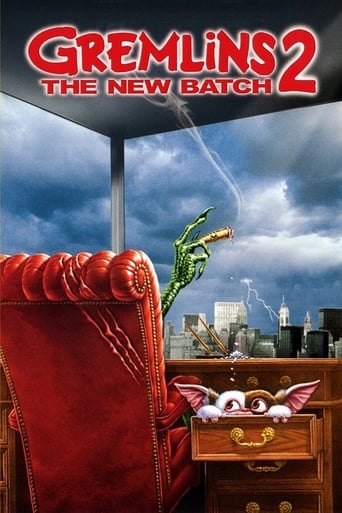 - +
Rate this film
Add a review
Delete Rating/Review Share Add to queue
In your queue
Remove it
Gremlins 2: The New Batch 1990

Noah Rymer over 2 years ago
Underrated and very self-aware. Worth checking out.

Danial Pearce over 4 years ago
Even better than the original.

Robert Stuart over 4 years ago
This movie is the first film pumped full of speed and turned to eleven! Pure insanity!

Austin 6 years ago
Joe Dante makes fun of the first film, watch this film through that lens and its great!

Aaron Wallis almost 8 years ago
Sheesh this is terrible in comparison to the first film.

Kayley Sage over 2 years ago

Steven Jv over 3 years ago

Robert Stuart over 3 years ago

Asael Acosta over 4 years ago

Eric Cone almost 5 years ago
Gremlins 2: The New Batch is a 1990 American horror comedy film, and the sequel to Gremlins (1984). It was directed by Joe Dante and written by Charles S. Haas, with creature designs by Rick Baker. It stars Zach Galligan, Phoebe Cates, John Glover, Robert Prosky, Haviland Morris, Dick Miller, Jackie Joseph, Robert Picardo and Christopher Lee; additionally, Frank Welker (who played Stripe in the first film) reprises his role as a gremlin. The story continues the adventures of the creature Gizmo (voiced by Howie Mandel), who spawns numerous small monsters when wet. In the first film, Gizmo's offspring rampaged through a small fictional town. In Gremlins 2, Gizmo multiplies within a skyscraper in New York City. The new creatures thus pose a serious threat to the city should they be able to leave the building, and much of the story involves the human characters' efforts to prevent this disaster. As with the first film, Gremlins 2 is a live action horror comedy film; however, Dante put...
Read more on