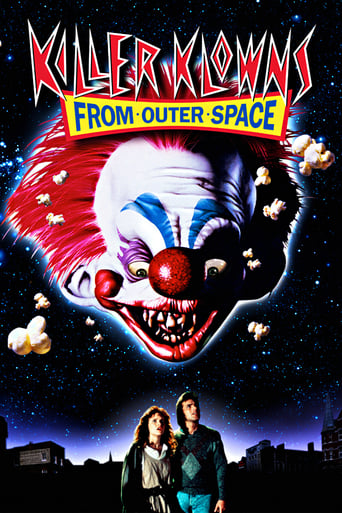 Eric Brainard over 1 year ago
Goofy B-movie. Sci-fi, horror, comedy. A cult classic for sure simply for its absurdity.

Alexis 6 years ago
It is what it is.

Henke over 6 years ago
So stupid but really great movie. I Love the soundtrack by Dickies

Anthony Kozlowski 7 years ago
Plays like a Terry Gilliam film on crack. Try not to ask questions while watching it.

Jake Boone over 1 year ago

Jaclyn Baros over 2 years ago

Anders Klingsheim over 4 years ago

Robert Stuart over 4 years ago

Carola D'Agostino over 5 years ago
Killer Klowns From Outer Space is a 1988 American comedy horror movie, made by The Chiodo Brothers and starring Grant Cramer. It is the only Chiodo Brothers' directed and written film – they have worked in many other projects in other roles, such as producing and visual effects. The film is about a race of aliens (who resemble evil clowns) that arrive on Earth to capture and harvest people to use as sustenance. An army of sadistic aliens forms land their circus tent ship in the sleepy American town of Crescent Cove (filmed in Watsonville/Santa Cruz, California). An old man discovers the spaceship but he and his dog are quickly executed by the alien clowns whilst investigating. A couple of people, named Mike Tobacco (Cramer) and Debbie Stone (Snyder) out for a romantic evening encounter the Klowns' spaceship and goof around for a while until they enter a room filled with cotton candy cocoons and find the old man's dead corpse in one of them, barely escaping capture. They are chased by...
Read more on