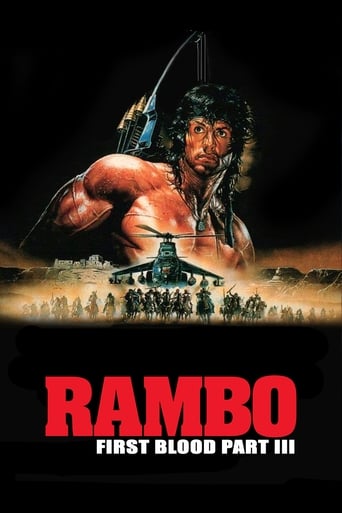 Taylor Reginald Wright over 7 years ago
Some spectacular action sequences that don't compensate for a shallow entry in the series.

Juan Lozano over 7 years ago
what happens when Stallone doesn't write. Still enjoyable though.

Rafael Santos over 4 years ago

Timothy Masterson over 5 years ago

Amanda Allen over 6 years ago

Jake Boone over 6 years ago

francesco summers over 6 years ago

Zer0 Squared almost 7 years ago
Rambo III is an American Action film released on May 25, 1988. It is the third film in the Rambo series following First Blood and Rambo: First Blood Part II. It was in turn followed by Rambo in 2008, making it the last film to feature Richard Crenna as "Colonel Sam Trautman", however, Crenna does appear in the final Rambo film in flashbacks. One minute of the movie was censored in the United Kingdom. The film opens with Colonel Sam Trautman (Richard Crenna) returning to Thailand to once again enlist the help of Vietnam veteran John J. Rambo (Sylvester Stallone). After witnessing Rambo's victory in a stick fighting match, Trautman visits the construction site of the Buddhist temple Rambo is helping to build and asks Rambo to join him on a mission to Afghanistan. The mission is meant to supply weapons, including FIM-92 Stinger missiles, to Afghan rebels, the Mujahideen, who are fighting the Soviets in the Soviet-Afghan War. Despite showing him photos of civilians suffering under Soviet...
Read more on