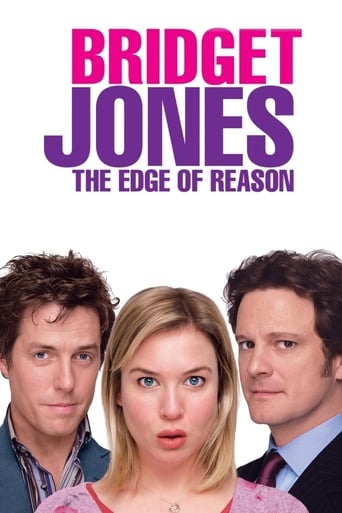 - +
Rate this film
Add a review
Delete Rating/Review Share Add to queue
In your queue
Remove it
Bridget Jones: The Edge of Reason 2004

Rowan Humphreys over 6 years ago
Often film sequels are awful, but this is amazing!

Davide Pellegrini over 6 years ago
funny

N B over 2 years ago

Rachel Marshall over 2 years ago

Sofia Zavaleta over 3 years ago
Bridget Jones: The Edge of Reason is a 2004 romantic comedy film directed by Beeban Kidron, based on Helen Fielding's novel of the same name. It stars Renée Zellweger as Bridget Jones, Colin Firth as Mark Darcy, and Hugh Grant as Daniel Cleaver. It is the sequel to Bridget Jones's Diary (2001). There are significant differences in the storylines between the novel and this film adaptation, and between the United States version and United Kingdom version of the film, including an alternate ending. The film is a co-production between the United Kingdom, France, Germany and Ireland. The film begins shortly before Bridget's mother's (Gemma Jones) yearly Turkey Curry Buffet. Bridget (Renée Zellweger) is ecstatic about her relationship with Mark Darcy (Colin Firth). However, Bridget's confidence in her relationship is shattered when she meets Mark's colleague, the beautiful Rebecca Gilles (Jacinda Barrett). Bridget meets her ex, Daniel Cleaver (Hugh Grant), at her job for Sit-Up Britain and...
Read more on