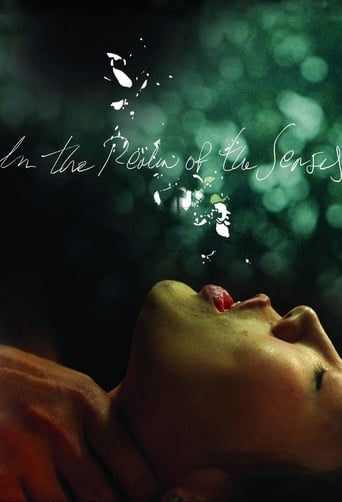 Austin almost 6 years ago
The film is incredibly unnerving, especially given that, on paper, it may seem tame.

Henry Cropper over 6 years ago
instantly draws comparison to last tango ..this is definitely stranger

Adam Sahilu over 4 years ago

Jesse Beatson over 4 years ago

Crystal Coleman over 5 years ago

Destiny over 5 years ago

Lowfill Tarmak almost 6 years ago
In the Realm of the Senses (Japanese: 愛のコリーダ, Ai no Korīda, literally Bullfight (Spanish: Corrida) of Love; French: L'Empire des sens) is a 1976 Franco-Japanese romantic drama film directed by Nagisa Oshima. It is a fictionalised and sexually explicit treatment of an incident from 1930s Japan, that of Sada Abe. It generated great controversy during its release; while intended for mainstream wide release, it contains scenes of unsimulated sexual activity between the actors (Tatsuya Fuji and Eiko Matsuda, among others). In 1936 Tokyo, Sada Abe (Eiko Matsuda) is a former prostitute who now works as a maid in a hotel. The hotel's owner, Kichizo Ishida (Tatsuya Fuji), molests her, and the two begin an intense affair that consists of sexual experiments, drinking, and various self-indulgences. Ishida leaves his wife and family to pursue his affair with Abe. Abe becomes increasingly possessive and jealous of Ishida, and Ishida more eager to please her. Their mutual obsession escalates to the...
Read more on