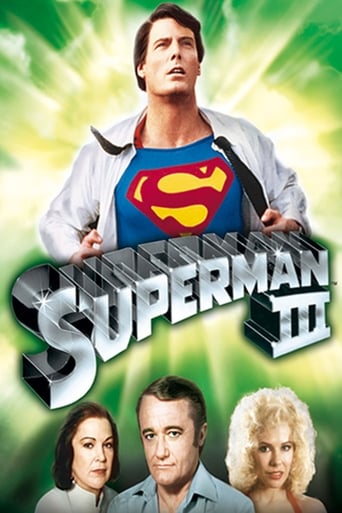 Andy Whitfield over 7 years ago
I don't know why I enjoy this one so much - guilty pleasure, I guess.

István Földházi over 3 years ago

Asael Acosta over 4 years ago

Mandy Allen over 5 years ago

Rachel Finston over 5 years ago

Stephen James Hughes over 6 years ago

Nino Vignjevic over 6 years ago

oliver smith almost 7 years ago
Superman III is a 1983 superhero film and the third film in the Superman film series based upon the long-running DC Comics superhero. Christopher Reeve, Jackie Cooper, Marc McClure and Margot Kidder are joined by new cast members Annette O'Toole, Annie Ross, Pamela Stephenson, Robert Vaughn and Richard Pryor. The film was the last Reeve/Superman film produced by Alexander Salkind and Ilya Salkind. It was followed by Supergirl (produced by the Salkinds) in 1984 and the non-Salkind produced sequel Superman IV: The Quest for Peace in 1987. The film was less successful than the first two Superman movies, both financially and critically. While harsh criticism focused on the film's comedic and campy tone, Reeve was praised for his much darker performance as the corrupted Superman. Following the release of this movie, Pryor signed a five-year contract with Columbia Pictures worth $40 million. Series producer Ilya Salkind originally wrote a treatment for this film that included Brainiac,...
Read more on