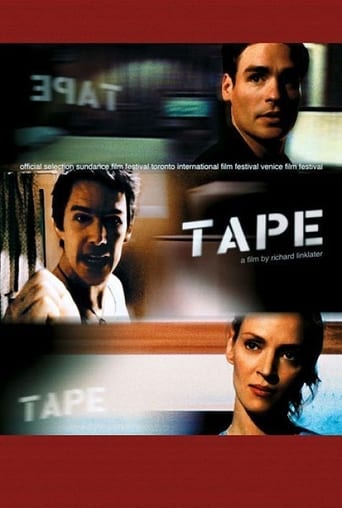 Damian Campo almost 5 years ago
Nice film that shows the different perceptions that people can have about a single event.

Daniel McCoy over 1 year ago

Doug Rattray over 6 years ago

Michael Kirk over 7 years ago

Kara Bombell over 7 years ago

Josh Wiljanen over 7 years ago

Guillermo Baigorria over 8 years ago
Tape is a 2001 drama film directed by Richard Linklater and written by Stephen Belber, based on his play of the same name. It stars Ethan Hawke, Robert Sean Leonard, and Uma Thurman. The entire film takes place in real-time. In a motel room in Lansing, Michigan. Vince (Hawke), a drug dealer/volunteer firefighter from Oakland, is in town to support his old high school friend's entry into the Lansing film festival. His friend, documentary filmmaker Jon Salter (Leonard), joins Vince in his motel room and the two reminisce about their high school years. They get on the subject of Amy (Thurman), Vince's former girlfriend. It appears that, while they dated for some time, Vince and Amy never had sex. However, after their relationship had ended, Amy slept with Jon. Vince claims Amy had told him that Jon had raped her. Vince becomes obsessed with, and eventually succeeds in getting a verbal confession from Jon about, the alleged rape. Immediately after Jon's admission, Vince pulls out a hidden...
Read more on