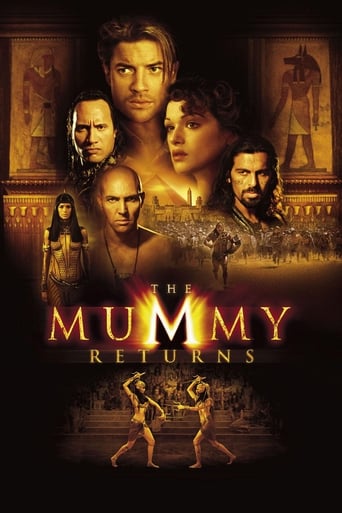 Grace almost 3 years ago
Plot was a bit worn and some dialogue a bit tacky, but decent sequel.

Malory over 4 years ago
funny, but kinda sexist, not my kind of movie tbh

Justin L. Clemons 6 years ago
They continue to piss off the mummy. Great move.

Kosala Liyanage 7 years ago
Not a great movie, but very entertaining. Good chemistry between the leads.

Ana McCabe over 7 years ago
Funny, a great sequel!

Natalie Ricketts over 1 year ago

Michelle Roussell almost 2 years ago
The Mummy Returns is a 2001 American adventure film written and directed by Stephen Sommers, starring Brendan Fraser, Rachel Weisz, John Hannah, Arnold Vosloo, Oded Fehr, Patricia Velásquez and Freddie Boath. The film is a sequel to the 1999 film The Mummy. Filming took place in London, Morocco, and Jordan. The Mummy Returns inspired the 2002 spin-off film The Scorpion King which is set 5,000 years prior and whose titular character, played by Dwayne Johnson (The Rock), was introduced in this film. It was followed by the 2008 sequel The Mummy: Tomb of the Dragon Emperor. In 3067 BC, the Scorpion King (Dwayne Johnson), leads his army on a campaign to conquer the world. After seven years of fighting, the Scorpion King and his army are defeated and exiled to the desert of Ahm Shere. One by one they die of heat exhaustion, leaving only the Scorpion King, who swears an oath to Anubis, god of the underworld, exchanging his soul for the power to defeat his enemies. Anubis grants his wish,...
Read more on