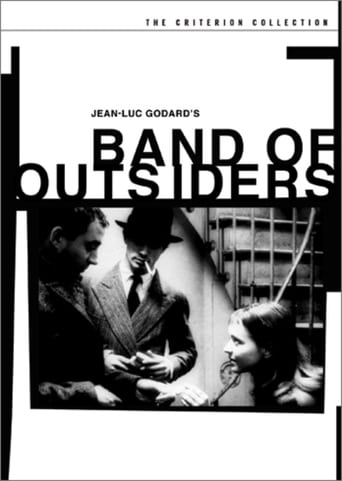 Cveti Kalcheva over 3 years ago
Godard brings so much innovation in each of his films. Beautiful.

Austin almost 6 years ago
The film is both gleefully unconventional and remarkably restrained. It's great fun.

Eric Ratzlaff over 5 years ago

Tomislav Pavicic over 5 years ago

Facu Leiva-Freytes over 6 years ago

daniel o'keefe over 6 years ago

Bis Lf over 7 years ago

Alexander HV over 7 years ago

Hal Incandenza over 7 years ago

Michael Norman over 7 years ago

Diogo T over 7 years ago
A beautiful young woman (the famous actress Anna Karina) meets two young men who convince her to help them rob her aunt.  A surreal version of a Hollywood gangster movie set in 1960's Paris, Bande å Part contains wonderful dance scenes, whimsical and tighter thematic and visual construction, and a pervasive, faintly romantic feeling that is unlike the rest of Godard's work. There is a great, memorable moment where, just before committing the crime, the trio take some time off to view some of the Louvre's art collection, at high speed.    A terrific, modern, melancoly movie. The film influenced on American director Quentin Tarantino who named his production company "A Band Apart".
Read more on