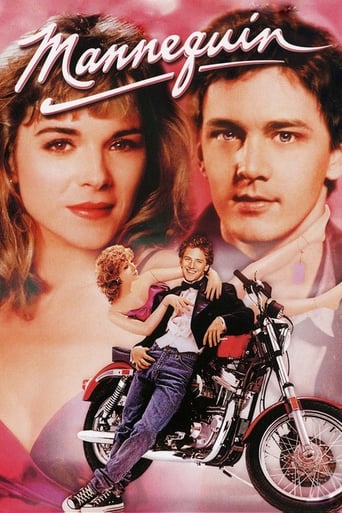 bernita 2 years ago
kind of bad and fun to watch. No chemistry between the two leads. fun fight scenes

Sasha 5 years ago
Fun and cute and colourful, but a bit boring overall.

Robyn Hamilton almost 7 years ago
A fun, fresh and kitschy 80s fantasy. A delight to watch

Mandy Allen over 5 years ago

Ashtyn Bell over 5 years ago

Hannah Newman over 5 years ago

Linden over 6 years ago
Mannequin is a 1987 romantic comedy film, starring Andrew McCarthy, Kim Cattrall, Meshach Taylor, James Spader, G. W. Bailey, and Estelle Getty. It was co-written and directed by Michael Gottlieb, and the original music score was composed by Sylvester Levay. Mannequin received a Best Original Song Oscar nomination for its main title tune: "Nothing's Gonna Stop Us Now", by Starship. (and #1 in the Billboard Hot 100 on April 4, 1987 and reached #1 on the UK Singles Chart for four weeks the following month.). It was followed by a sequel, Mannequin Two: On the Move, in 1991. Ancient Egypt... Ema ‘Emmy’ Hasure (Kim Cattrall) hides in a pyramid from her mother, who wants her daughter to marry a camel dung-dealer against Emmy's will. Emmy prays for the gods to get her out of this mess. Her mother denies anything is happening, and goes on about how the gods have more important things to worry about. Yet the gods answer Emmy's prayers; she travels through time, on a hunt for true love....
Read more on