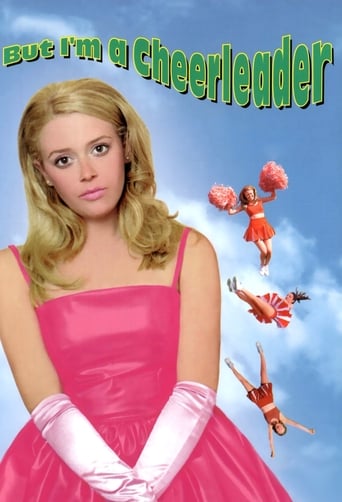 VintageFemme 3 years ago
I have watched this so many times and I never get tired of it! A classic!

Michael Cole 6 years ago
An enjoyable movie that shows how ridiculous gay-to-straight programs are.

Luna Lovegood over 6 years ago
cynical and bitter and funny and sweet.

Robyn Hamilton over 7 years ago
Totally OTT and silly but lots of fun and surprisingly touching. Great costumes!

Gervie Ebron over 3 years ago

signe wright over 4 years ago

Molly Flanagan over 5 years ago

Amber-Lynn over 5 years ago

Veronica Boyce over 5 years ago

Jason Gilmore over 5 years ago

Cynthia Vance almost 6 years ago
But I'm a Cheerleader is a 1999 satirical romantic comedy film directed by Jamie Babbit and written by Brian Wayne Peterson. Natasha Lyonne stars as Megan Bloomfield, an apparently happy heterosexual high school cheerleader. However, her friends and family are convinced that she is a homosexual and arrange an intervention, sending her to a residential inpatient reparative therapy camp to cure her lesbianism. There Megan soon realizes that she is indeed a lesbian and, despite the therapy, gradually comes to embrace her sexual orientation. The supporting cast includes Dante Basco, Eddie Cibrian, Clea DuVall, Cathy Moriarty, RuPaul, Richard Moll, Mink Stole, Kip Pardue, and Bud Cort. But I'm a Cheerleader was Babbit's first feature film. It was inspired by an article about conversion therapy and her childhood familiarity with rehabilitation programs. She used the story of a young woman finding her sexual identity to explore the social construction of gender roles and heteronormativity....
Read more on