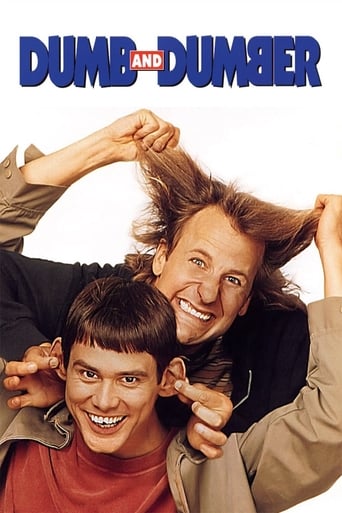 Leif Jacobson 4 years ago
My favorite Farrelly Bros. movie. At this point, it's basically a classic.

Dominique Bosman over 5 years ago
Very funny... If you like Jim Carrey-humour. If you don't, this movie is a waste of time.

Mirza Šišić over 5 years ago
Childish and funny.

Jonathan Evans 6 years ago
funny... but no. I liked that annoying noise scene though

JustinMFnTime 6 years ago
One of the greatest comedies of our time. Jim Carry and Jeff Daniels nail it w/ style

Joshua Byrd over 6 years ago
Probably the greatest film in existence.

Emmet O Sullivan over 6 years ago
First saw it when I was like eight, it still holds up, still genuinely funny

Professional Moron almost 7 years ago
I adore it, but nostalgia/childhood memories help me. Should prove funny for newcomers.

Dylan Clites over 7 years ago
A comedy classic. It's pretty dumb, but I can't make it five minutes without cracking up.

Jesse Smith over 7 years ago
Intentionally "dumb" humor that works, as opposed to dumb humor that ends up being dumb.

Michelle Roussell over 1 year ago
Dumb and Dumber is a 1994 picaresque or buddy comedy film starring Jim Carrey and Jeff Daniels. Written and directed by the Farrelly brothers, the film follows the cross-country trek of Lloyd Christmas and Harry Dunne, two good-natured but incredibly moronic friends. Making heavy use of slapstick comedy and gross-out humor, Dumb and Dumber contributed to the launch of a successful career for the Farrelly brothers. Lloyd Christmas (Jim Carrey) is a simple-minded limousine driver in Providence, Rhode Island. Harry Dunne (Jeff Daniels), Lloyd's roommate and buddy, is a part-time self-employed pet groomer who drives the "Shaggin’ Wagon", a van converted into what looks like a shaggy dog. They plan on opening their own pet store that sells worm farms, though their lack of finances are troubling them. One day, Lloyd becomes infatuated with his passenger client, Mary Swanson (Lauren Holly), on her way to the airport and ultimately home to her family in Aspen, Colorado. Mary intentionally...
Read more on