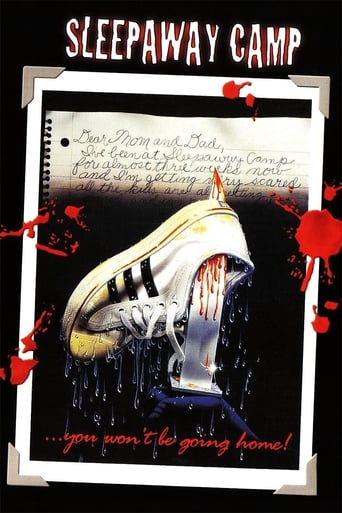 Henke 7 years ago
Not that great movie but i really love the weird end.

Ben Calverley 8 years ago
Just plain bizarre a lot of the time but still an amusing addition to the slasher film.

Anteater over 3 years ago

Elijah Svigals over 3 years ago

River Tam over 6 years ago

Jonathan Ray Mitchell over 6 years ago

Mark Henry over 7 years ago

Todd Stambaugh over 8 years ago

Jake Barlow over 8 years ago

Greigh Johanson over 8 years ago

Daniel Troma Johnsson over 8 years ago
Sleepaway Camp is a 1983 cult classic slasher film written and directed by Robert Hiltzik—who also served as executive producer. The film is about teen campers getting killed at a summer camp. The film came at a time when slasher films were in their heyday, and is frequently listed as having one of the most shocking endings among horror films. The film opens in summer, with John Baker and his two children, Angela and Peter, out on a lake. After their boat flips, John and the children head ashore, where John's lover, Lenny, is calling. As the family swims, a motorboat runs them over. Eight years later, it is revealed that Angela survived and is now living with her eccentric aunt Dr. Martha Thomas and cousin Ricky Thomas. Angela and Ricky are sent to Camp Arawak. Due to her introverted nature, Angela is bullied, her main tormentors being fellow camper Judy and camp counselor Meg. The head cook, Artie attempts to molest Angela until Ricky interrupts, and the two children flee. While...
Read more on