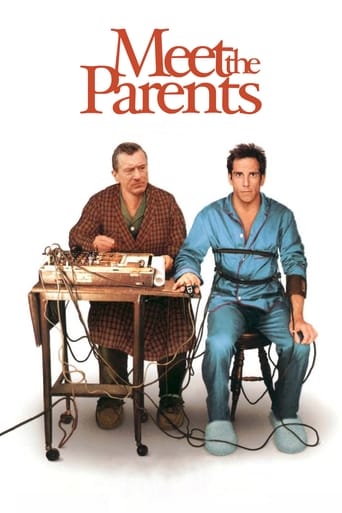 Luke Duncan almost 2 years ago
So awkwardly funny when it wasn’t trying to be a drama.

Alice Albescu over 4 years ago
It takes a lot to make me not enjoy De Niro. Congrats, Ben Stiller.

Leif Jacobson over 4 years ago
Solid comedy that's managed to maintain some of the laughs over the years.

Josh Steadman over 6 years ago
No Oscars here, but this is a comedy staple. Forget the sequels, this is it right here.

Fernando Olivas almost 7 years ago
Rewatched because of family...

loong over 7 years ago
Funny as hell! All three parts are great!

Nate McBean over 7 years ago
Great casting made a decent story outstanding. (8/28/2012)

Dylan Clites over 7 years ago
One of Ben Stiller's best. His chemistry with De Niro is impeccable. Hilarious.

Anthony 2 years ago
Meet the Parents is a 2000 American comedy film written by Jim Herzfeld and John Hamburg and directed by Jay Roach. Starring Robert De Niro and Ben Stiller, the film chronicles a series of unfortunate events that befall a good-hearted but hapless male nurse while visiting his girlfriend's parents. Teri Polo, Blythe Danner, and Owen Wilson also star. Meet the Parents is a remake of a 1992 film of the same name directed by Greg Glienna and produced by Jim Vincent. Glienna—who also played the main protagonist—and Mary Ruth Clarke co-wrote the screenplay. Universal Studios purchased the rights to Glienna's film with the intent of creating a new version. Jim Herzfeld expanded the original script but development was halted for some time. Jay Roach read the expanded script and expressed his desire to direct the film but Universal declined him. At that time, Steven Spielberg was interested in directing the film while Jim Carrey was interested in playing the lead role. The studio only offered...
Read more on