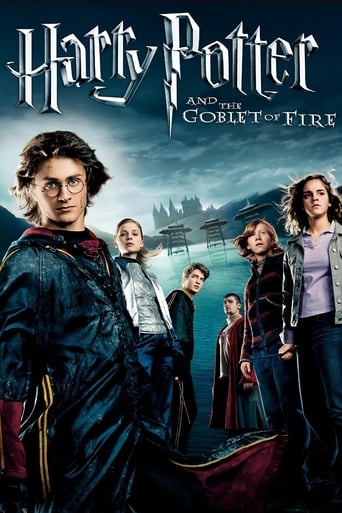 Natalie 2 years ago
good thriller & looked good but the book was better. pacing could have been better

Freddie Kay over 4 years ago
"Fantastic"

Jennifer Pease 5 years ago
worst of the 8 films. I always skip it during a marathon

diane almost 6 years ago
Terrible adaptation of the worst book in the series. Only good part is the end cuz BAD GUY

Dominique Bosman over 6 years ago
Not what I expected. Don't need to see this to understand the rest of the films. But OK.

Brian Pagano almost 7 years ago
One of the most entertaining of the Harry Potter films.

Charlie Gleason almost 7 years ago
The climax is moving, potentially because of how long it took to get there. Not the best.

Daniel Jones 7 years ago
It wasn't bad, but obviously sets up the villain for the next movie. Letdown after Azkaban

Orren Jensen 7 years ago
Weakest of all the films

Saška Svirac 7 years ago
my favorite HP movie, a turning point from childish to awesome

Jonathan Evans over 7 years ago
I had just read the book and thought "reading first ruins movies". It was just a shit film

georgie over 7 years ago
the ball & the tournament & robert pattinson = perfect.

Matthew Tubbs over 7 years ago
The first Potter i ever saw, Brilliant

Alexandra Nt Lampost over 7 years ago
World of Wizardry, what took you so long to come back? It's been a struggle without you.

Robyn Hamilton over 7 years ago
The best ludicrously unfaithful adaptation going. Tremendously rewatchable!
Harry Potter and the Goblet of Fire is a 2005 fantasy film directed by Mike Newell and based on the novel of the same name by J. K. Rowling. It is the fourth instalment in the Harry Potter film series, written by Steve Kloves and produced by David Heyman. The story follows Harry Potter's fourth year at Hogwarts as he is chosen by the Goblet of Fire to compete in the Triwizard Tournament, a highly dangerous competition. The film stars Daniel Radcliffe as Harry Potter, alongside Rupert Grint and Emma Watson as Harry's best friends Ron Weasley and Hermione Granger. It is the sequel to Harry Potter and the Prisoner of Azkaban and is followed by Harry Potter and the Order of the Phoenix. Filming began in early 2004 and the scenes of Hogwarts took place at the Leavesden Film Studios. Five days after its release, the film had grossed over US$102 million at the North American box office, which is the third highest first-weekend tally for a Harry Potter film behind Harry Potter and the Deathly...
Read more on