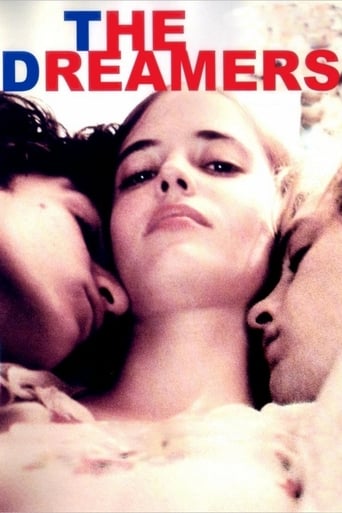 Cveti Kalcheva 3 years ago
Isa and Theo's relationship is bizarre, but really interesting.

Juan Manuel almost 6 years ago
One of my favorite movies! Can't stop loving it! Specially because there I met Lovely Eva!

Metehan Balaban over 6 years ago
necessary and perfect!

Amira Mohamed over 6 years ago
Touches on interesting themes, yet never goes anywhere interesting with them. Good ending.

Bijit Sarkar almost 7 years ago
I was blown away by this Movie. An awesome Rendition of Jimi's HEY JOE

Heejoo Kim 7 years ago
One of my real favorite movies. "We accept you, one of us! One of us!"

Odin Dutton over 7 years ago
A bit of a strange one but awesome non-the-less.

nathaniel lokers over 7 years ago
Gotta know what was happening in this time period to catch most of the details.

Justinas Jarukaitis almost 2 years ago
The Dreamers is a 2003 French/British/Italian drama film directed by Bernardo Bertolucci. The screenplay is by Gilbert Adair, based on his own novel The Holy Innocents. The film was an international co-production by companies from France, Italy, and Great Britain. The Dreamers tells the story of an American university student in Paris who, after meeting a peculiar brother and sister who are fellow film enthusiasts, becomes entangled in an erotic conflict. It is set against the backdrop of the 1968 Paris student riots. The film makes several references to various movies of classical and New Wave cinema, incorporating clips from films that are often imitated by the actors in particular scenes. The Dreamers was controversial in the United States for its depiction of nudity and sexual content, which attracted an NC-17 rating. The primary language spoken in the film is English, though French and English are spoken interchangeably throughout. A young American exchange student, Matthew ...
Read more on