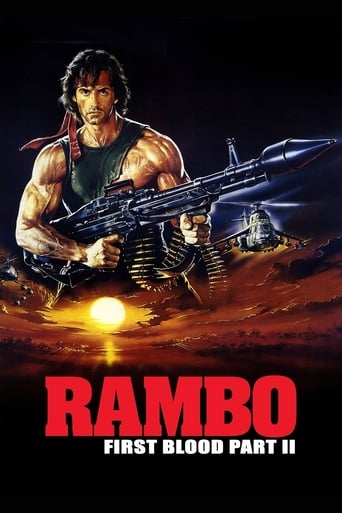 Peter Renshaw over 6 years ago
The cold ware was ending as this film came out.

Taylor Reginald Wright over 7 years ago
An entertaining action thriller that works fine, but pales in comparison to the original.

Glen Maddern over 8 years ago
Terrible, but still underrated

Nahuel Iturrieta over 2 years ago

Andrew Dennison over 4 years ago

Rosalio Galvan over 4 years ago

Jack Genius over 5 years ago
Rambo: First Blood Part II (also known as Rambo II) is a 1985 action film. A sequel to 1982's First Blood, it is the second installment in the Rambo series starring Sylvester Stallone, who reprises his role as Vietnam veteran John Rambo. Picking up where the first film left, the sequel is set in the context of the Vietnam War POW/MIA issue; it sees Rambo released from prison by Federal order to document the possible existence of POWs in Vietnam, under the belief that he will find nothing, thus enabling the government to sweep the issue under the rug. Rambo: First Blood Part II was directed by George P. Cosmatos. The film was on the ballot for the American Film Institute's 100 Years... 100 Cheers, a list of America's most inspiring movies. Entertainment Weekly ranked the movie number 23 on its list of The Best Rock-'em, Sock-'em Movies of the Past 25 Years. John Rambo, having been tried, convicted, and sentenced to time at hard labor, is working in a labor camp prison when he gets a...
Read more on