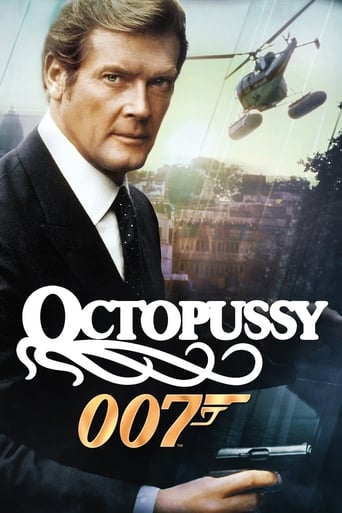 Dylan Clites 7 years ago
Tries hard to make you not like it, but most of the cheese present is actually kinda cool.

Sini Stenbacka over 1 year ago

Justinas Jarukaitis over 1 year ago

Angela Ka over 4 years ago

Jim Barton over 5 years ago
Octopussy (1983) is the thirteenth entry in the James Bond series, and the sixth to star Roger Moore as the fictional MI6 agent James Bond. The film's title is taken from a short story in Ian Fleming's 1966 short story collection Octopussy and The Living Daylights. However, the film's story is original though the film includes a portion inspired by the Fleming short story "The Property of a Lady" (included in 1967 & later editions of Octopussy and The Living Daylights), while the events of the short story "Octopussy" form a part of the title character's background and are recounted by her. In the film, Bond is assigned the task of following a general who is stealing jewels and relics from the Russian government. This leads him to a wealthy Afghan prince, Kamal Khan, and his associate, Octopussy. Bond uncovers a plot to force disarmament in Europe with the use of a nuclear weapon. Produced by Albert R. Broccoli and Michael G. Wilson, Octopussy was released in the same year as the non...
Read more on