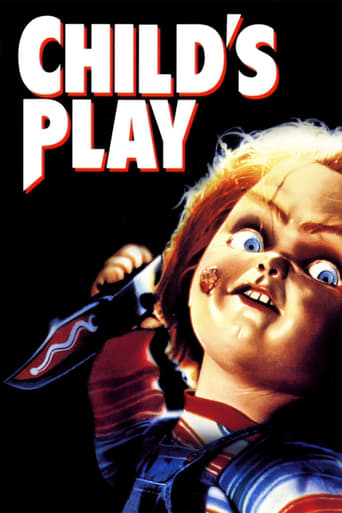 Tony Gandía almost 5 years ago
Hard to not be afraid of dolls after this well-crafted, sadistic doozy

Henke over 6 years ago
A real classic movie.

Davide MrBlonde over 1 year ago

Nathaniel Spencer over 1 year ago

Natalie over 2 years ago

Humberto Octavio over 2 years ago

Alexandre Brisson over 2 years ago

Mandy Allen over 3 years ago

vics over 3 years ago

Mariana over 4 years ago
Child's Play is a 1988 American horror film written by Don Mancini and directed by Tom Holland. The film was released on November 9, 1988 and stars Catherine Hicks, Chris Sarandon and Brad Dourif. The official tagline of the film was "You'll Wish it Was Only Make-Believe." The film met with moderate success upon its release, and has since developed a cult following among fans of the horror genre. The film is the first in the Child's Play film series and was the only film in the series released by MGM/UA, as the rights to the series were sold to Universal beginning with Child's Play 2. In 2008, a remake of the film was discussed and slated for a 2012 or 2013 release. On the morning of November 9, 1988 in Chicago, Illinois, while being chased by Detective Mike Norris (Chris Sarandon), Charles Lee Ray, a serial killer known as "The Lakeshore Strangler" (Brad Dourif), is shot and mortally wounded. Knowing he cannot escape, the dying Charles takes cover inside a toy store, finding boxes of...
Read more on