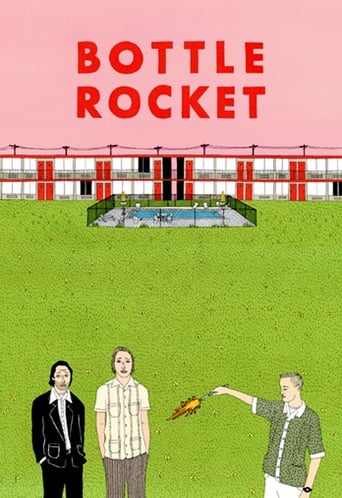 Aaron Jones almost 2 years ago
Hilarious and quotable, can't even tell it's a debut

Griffin Maurer over 5 years ago
Good characters and cinematography, but lacking a structured plot. Quirky as usual.

Matthew Bettencourt 6 years ago
Hilarious and unique. Entertaining from start to finish.

Mario Schievenini 6 years ago
Not bad at all, the humor is really good, I'd rather say fine.

J.H. Howes over 6 years ago
Never before had I wanted so badly to be one of the Wilson brothers.

Anthony Kozlowski 7 years ago
More personable than most of Anderson's work, but you need to be in the right mood for it.

Dylan Clites 7 years ago
One of Wes Anderson's weaker films. His style wasn't developed yet, so nothing stands out.

Rachel Kennelly over 7 years ago
I love Wes Anderson, and the Wilsons were hilarious. Quality movie.

Dominic Dirupo over 7 years ago
Owen Wilson's first film and he's funny as hell. Chuckles for a Sunday afternoon

David-Alexandre Sobal over 7 years ago
great movie. some scenes are just unforgetable

Jacob Hernandez over 7 years ago
Anderson's first, and it shows--both in its rawness and its tropes. Flawed but wonderful.

Lance Cooper over 1 year ago

abbie gilfilen over 2 years ago

matthew olsen over 2 years ago

Jonathan Evans almost 3 years ago
Bottle Rocket is a 1996 comedy film directed by Wes Anderson. It was co-written by Anderson and Owen Wilson. As well as being Wes Anderson's directorial debut, Bottle Rocket was the debut feature for brothers Owen Wilson and Luke Wilson, who co-starred with James Caan and Robert Musgrave. The film was a commercial failure but launched Anderson's career by drawing attention from critics. Director Martin Scorsese later named Bottle Rocket one of his top-ten favorite movies of the 1990s. Bottle Rocket is also the name of a short film, shot in 1992 and released in 1994, directed by Anderson upon which the feature-length film was based. The entire film was shot in Dallas, Fort Worth, and Hillsboro, Texas. The film centers on a group of aimless young men living in Texas. Dignan (Owen C. Wilson) "rescues" Anthony (Luke Wilson) from a voluntary mental hospital, where he has been staying for self-described exhaustion. Dignan has an elaborate escape planned and has developed a 75-year plan that...
Read more on