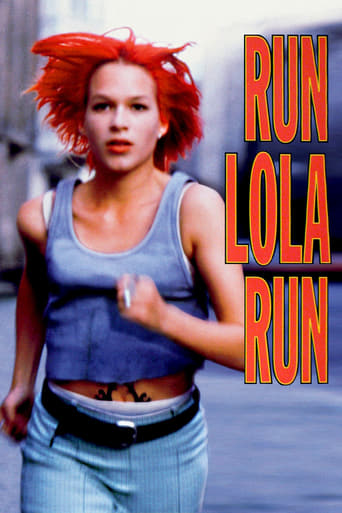 Philomene Tsamados over 3 years ago
awesome!!! such a distinctive style!!!!!!

carlos f hernandez 5 years ago
Departing from the norm, film with unknown plot, still makes me want to keep watching.

Mikus Zeberiņš over 6 years ago
Action - reaction, butterfly effect theory based movie and an awesome one for that matter.

Kosala Liyanage almost 7 years ago
Whoa, that was some ride. Loved it!

Tasmin Jade 7 years ago
So weird!

Kealey Nutt over 7 years ago
Had to watch this about 30 times for an assignment during uni. Great, but makes me anxious

Jamille Cruz over 7 years ago
quite interesting. go watch it

Robyn Hamilton over 7 years ago
All about the style, but gripping nonetheless.

Marina Đukanović over 7 years ago
Guess all the running wasn't THAT interesting...

Ben Emmel almost 8 years ago
Lola runs, kicks ass, and explores the meaning of self.

Ali Çolpan over 2 years ago
Run Lola Run (German: Lola rennt, literally Lola Runs) is a 1998 German crime thriller film written and directed by Tom Tykwer and starring Franka Potente as Lola and Moritz Bleibtreu as Manni. The story follows a woman who needs to obtain 100,000 German marks in 20 minutes to save her boyfriend's life. The film's three scenarios are reminiscent of the 1981 Krzysztof Kieślowski film Blind Chance; following Kieślowski's death, Tykwer directed his planned film Heaven. The film begins with Lola (Franka Potente) receiving a phone call from her distraught boyfriend, Manni (Moritz Bleibtreu). He is a small-time criminal and has lost 100,000 marks belonging to his crime boss by accidentally leaving it on a train (Lola was supposed to pick him up, but her moped was stolen while she was buying cigarettes). After the doors of the train closed, he saw a homeless man pick up the bag of money but he was unable to get back onto the train before it left the station. Upon not seeing any trace of his...
Read more on