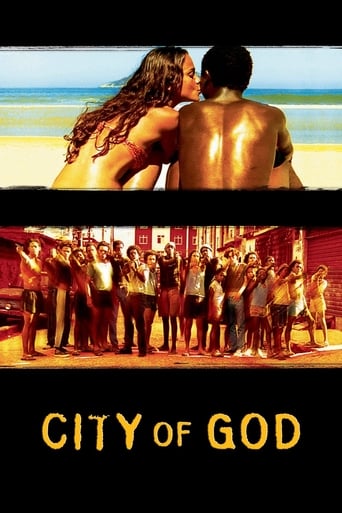 Felipe Orrego over 3 years ago
This movie is amazing, that´s all i can say. I love it

Musirah over 3 years ago
Despite the language barrier the film holds attention and remains exquisitely riveting.

Sabrina Longo 4 years ago
Amazing! a part of brazilian reality as you've never seen it

Jonathan Evans almost 5 years ago
Well, that was fucked!

emilio murillo almost 5 years ago
Brilliant film. The raw texture and harsh depiction are very precise. The script is round.

Leif Jacobson over 5 years ago
Beautifully shot, directed, and acted. I love this film.

John Coria over 5 years ago
The humanity is all gone in this raw portrayl of life in the worst of barrios. Watch once.

Alyssa Ramos 6 years ago
This is gold! Amazing is an understatement

Sergio Peña Soto over 6 years ago
No words. Amazing Film!

Dominique Laurion almost 7 years ago
An intense Crime epic about life in one of the most violent cities in the world.

Afua 7 years ago
Boat, happenings taken place in thestreets of Rio shown through the eyes of a photographer

Grant davies 7 years ago
such a good film

Frederik Værum Olesen over 7 years ago
A great story, that will catch most people. Absolutely love this film.

Robyn Hamilton over 7 years ago
I can't describe in 90 characters just how amazing this film is. Just watch it.

Elizabeth Lynn over 7 years ago
Beautifully shot, with visceral characters and a plot you won't soon forget

Charles Choo over 7 years ago
My favorite movie.
City of God (Portuguese: Cidade de Deus) is a 2002 Brazilian crime drama film directed by Fernando Meirelles and co-directed by Kátia Lund, released in its home country in 2002 and worldwide in 2003. All the characters existed in reality, and the story is based on real events. It was adapted by Bráulio Mantovani from the 1997 novel of the same name written by Paulo Lins. It depicts the growth of organized crime in the Cidade de Deus suburb of Rio de Janeiro, between the end of the '60s and the beginning of the '80s, with the closure of the film depicting the war between the drug dealer Li'l Zé and criminal Knockout Ned. The tagline is "If you run, the beast catches; if you stay, the beast eats", (a proverb analogous to the English "Damned if you do, damned if you don't"). The cast includes Alexandre Rodrigues, Leandro Firmino da Hora, Jonathan Haagensen, Douglas Silva, Alice Braga and Seu Jorge. Most of the actors were, in fact, residents of favelas such as Vidigal and the Cidade de...
Read more on