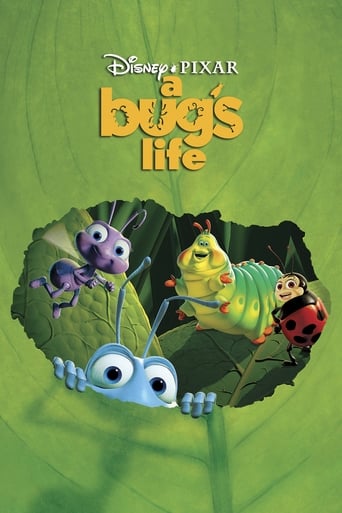 Amanda Mathews 3 years ago
Not the greatest but not terrible either.

Lino Monteiro over 5 years ago
"Pretend it's a seed". And indeed it grew into a fun but occasionally intense film.

Justin L. Clemons over 6 years ago
Great plot and animation. The grasshoppers are a-holes.

Angeline Schaaf almost 7 years ago
Kevin Spacey's voice is the best. It is a pretty good film, beautiful colours.

Ivan D'souza 7 years ago
This belongs in the catalogue of Pixar's golden age. Reals fun ideas, a great kids' film.

Ruan Erasmus 7 years ago
Classic movie a typical movie one would enjoy with a family member.

Salena G over 7 years ago
Good movie, what else do you expect from Pixar. Just personally not one of my favorites.

Andy Whitfield almost 8 years ago
The least memorable and rewatchable Pixar film, but still worth an initial viewing.

Renard Bansale 8 years ago
Fun and engaging, with a brilliant production design to boot. Proof that Pixar will last!

Dylan Clites 8 years ago
Pixar was definitely still getting their act together, but this is still awesome and funny

Michael Cole 8 years ago
Probably one of the weaker films in Pixar's lineup, but still a great film for children

Liam Price over 2 years ago

Joaquin Heye over 2 years ago
A Bug's Life is a 1998 American computer animated adventure comedy film produced by Pixar and released by Walt Disney Pictures in the United States on November 25, 1998. A Bug's Life was the second Disney·Pixar feature film after Toy Story, and the third American computer-animated film after Toy Story and DreamWorks' Antz. Based on Akira Kurosawa's film Seven Samurai, and Aesop's fable "The Ant and the Grasshopper", it tells the tale of an oddball individualist inventor ant named Flik who hires what he thinks are "warrior bugs" – actually circus performers – to fight off a small band of grasshoppers who have made the ant colony their servants. The film was directed by John Lasseter, and was co-directed by Andrew Stanton. Flik is an individualist and would-be inventor in a colony of ants. Flik is different and always unappreciated due to his inventions causing trouble. The colony is constantly oppressed by a gang of marauding grasshoppers who arrive every season demanding food from the...
Read more on