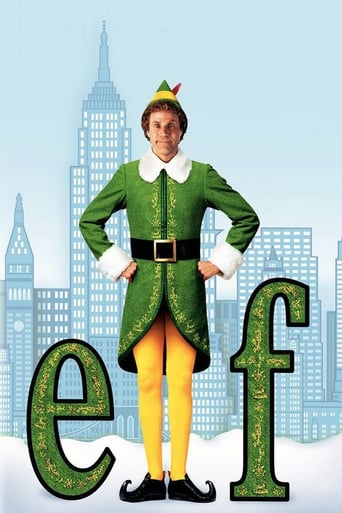 Thea Smith 2 years ago
My favourite Christmas movie of all time!

Rachel Marshall 2 years ago
Now I get why it’s so beloved! Charming and funny family film!

Emily Brown over 3 years ago
Some iconic scenes/quotes, but not as rewatchable as other Xmas films. Still great though.

Marina Đukanović 4 years ago
Really not a fan of Will Ferrell type of humor, but the ending made it little better...

Leif Jacobson 4 years ago
Falls apart a bit at the end, nevertheless an enjoyable Christmas film.

J.H. Howes over 5 years ago
Laughter through to the end, a great movie for kids and adults.

Michael Cole 6 years ago
Just enough adult humor to be an enjoyable film to watch with kids.

Colin McCarthy over 6 years ago
I do not know what all the Christmas hype is about this movie. Just as festive as Aliens.

Andy Eggleton over 6 years ago
Annoying.

Fae over 6 years ago
This movie was so stupid, I barely got through it.

Chelsea Foreman over 6 years ago
Hilarious. Everyone should watch this movie in December always.

Rowan Humphreys over 6 years ago
HAHAHAHA. no

Ryan Jewell over 6 years ago
The story was so stupid that I had to watch it again. Wait...What?

Tavis over 6 years ago
"I like to whisper too!"

Jonathon Cooke-Akaiwa 7 years ago
A Christmas classic in my family, one of only a few Will Ferral films I like. A must see.
Elf (stylized as elf) is a 2003 comedy film directed by Jon Favreau, written by David Berenbaum and starring Will Ferrell, James Caan, and Zooey Deschanel. It was released in the United States on November 7, 2003 and grossed over $220,400,000 worldwide. A baby crawls into Santa Claus' (Ed Asner) sack while he is delivering toys to an orphanage one Christmas Eve. He unwittingly takes the baby back to the North Pole, where Papa Elf (Bob Newhart) volunteers to raise him. He is named William, but they rename him Buddy (Will Ferrell) because he was wearing 'Little Buddy Diapers'. He is raised unaware that he is actually a human, until his enormous size and poor toy-making abilities force Papa Elf to tell him the truth. The old elf reveals that Buddy was born to Walter Hobbs (James Caan) and Susan Wells and given up for adoption, and that Walter never knew that he was born. He explains how Susan later died, and that Walter now works at a children's book company in New York City. Santa tells...
Read more on