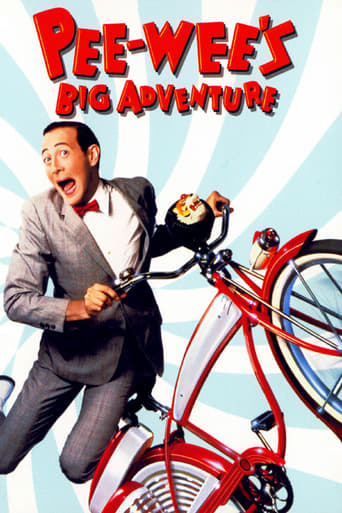 Ezequiel Castellanos over 3 years ago
allright

Paul Lanoue almost 4 years ago
I love it for the old BMX boys. JT racing and Team Murray bikes. Pee wee is timeless>

Lino Monteiro 5 years ago
Sheer madness. Childlike surrealism with a tinge of derangement, a good debut for Burton.

Daniel Jones over 5 years ago
I don't know how many times I watched as a kid. Still holds up in adulthood.

Jim Barton almost 6 years ago
You would think something like this would be crap but believe me it's not!

Henke over 6 years ago
Funny and one of Burtons best...

Joanna Ruiz 7 years ago
A Tim Burton classsic! "Tell 'em Large Marge sent ya!" - That line used to creep me out.

L over 2 years ago

Kenny Kensington over 3 years ago
Pee-wee's Big Adventure is a 1985 American adventure comedy film directed by Tim Burton in his full-length debut and starring Paul Reubens as Pee-wee Herman. Reubens also co-wrote the script with Phil Hartman and Michael Varhol. Supporting roles are played by Elizabeth Daily, Mark Holton, Diane Salinger and Judd Omen. Pee-wee's Big Adventure tells the story of Pee-wee Herman embarking on nation-wide adventure in search of his stolen bicycle. After the success of The Pee-wee Herman Show, Reubens began writing the script to Pee-wee's Big Adventure when he was hired by Warner Bros. Pictures. The producers and Reubens hired Burton to direct when they were impressed with his work on Vincent and Frankenweenie. Filming took place in both California and Texas. When Pee-wee's Big Adventure was released on August 9, 1985, it grossed over $40 million worldwide, but received generally mixed reviews. However, it eventually developed into a cult film and has since accumulated positive feedback. The...
Read more on