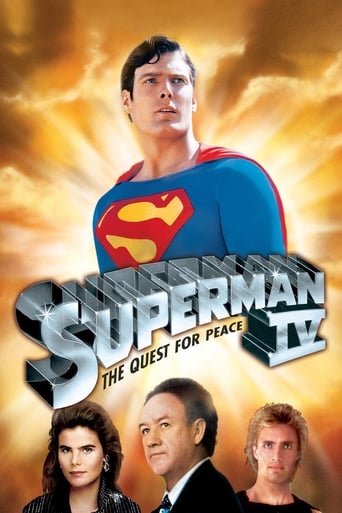 - +
Rate this film
Add a review
Delete Rating/Review Share Add to queue
In your queue
Remove it
Superman IV: The Quest for Peace 1987

Tony Gandía almost 6 years ago
Embarrassing for all involved.

Taylor Reginald Wright over 7 years ago
So bad it's good. Bad special effects and a heavy-handed message make for guilty pleasure.

Stitch M over 2 years ago

Mandy Allen over 3 years ago

Amanda Allen over 6 years ago

Russ Cullen over 7 years ago

Ronan Conway over 7 years ago
Superman IV: The Quest for Peace is a 1987 superhero film directed by Sidney J. Furie. It is the fourth film in the Superman film series and the last installment to star Christopher Reeve as the Man of Steel. It is the first film in the series not to be produced by Alexander and Ilya Salkind, but instead by Golan-Globus's Cannon Films, in association with Warner Bros. Gene Hackman returns as Lex Luthor as he creates an evil solar-powered Superman clone called Nuclear Man. Superman IV was neither a critical nor a box office success. The series went on hiatus until 2006, when Superman Returns, the final installment of this series, was released. After saving a group of cosmonauts whose ship is jeopardized by a rogue satellite, Superman visits his hometown of Smallville disguised as Clark Kent, checking in on the uninhabited farm where he grew up. In an empty barn he uncovers the space-capsule in which he was sent to Earth, and removes a green-glowing, Kryptonian energy module. A...
Read more on