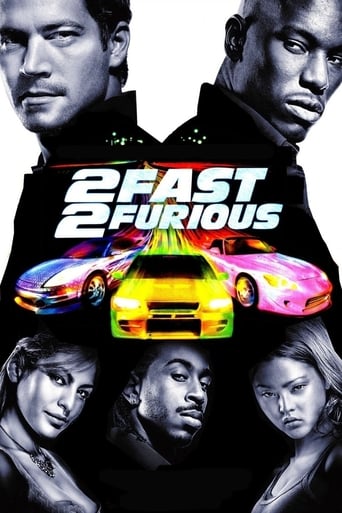 Ashleigh Louise Klaassen over 2 years ago
I just really couldn't care at all.

Henke 5 years ago
a pretty ok movie, the worst in the series so far

Justin L. Clemons 6 years ago
2 Fast 2 Furious... Act a FOOL! The car chase at the end was amazing.

Josh Steadman over 6 years ago
So the 1st has some redeeming qualities, this has almost none. Don't waste your time.

cyrax36 over 2 years ago

Graham Lea over 2 years ago

Jonathan Casey Spencer over 2 years ago

Joel Ulrich over 2 years ago

Bethany Foster over 2 years ago
2 Fast 2 Furious is a 2003 street racing action film directed by John Singleton. It is the second film in The Fast and the Furious film series following The Fast and the Furious (2001). It stars Paul Walker, Tyrese Gibson, Eva Mendes, Devon Aoki, and Chris Bridges; and was directed by John Singleton. The soundtrack was composed by David Arnold. It is the only film in the series to not feature Vin Diesel in the cast, though his character Dominic Toretto is referenced in the film. Paul Walker returns as ex-cop Brian O'Conner who teams up with his ex-con pal Roman Pearce (Gibson). The duo transport a shipment of dirty money for shady Miami-based import-export dealer Carter Verone (Cole Hauser), while working with undercover agent Monica Fuentes (Mendes) to bring Verone down. After allowing fugitive Dominic Toretto (Vin Diesel) to evade arrest in the first film, former LAPD officer Brian O'Conner (Paul Walker) finds himself on the run and leaves Los Angeles for Miami to start a new life....
Read more on