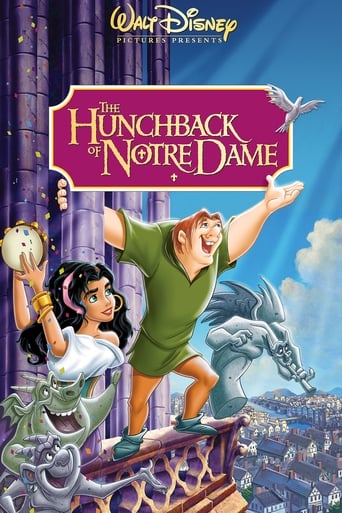 Lino Monteiro over 4 years ago
Darker and more brutal than other Disney titles. Like the cathedral, it's a massive film.

Randi Steers almost 5 years ago
"didn't Quasi deserve the girl?" NOBODY DESERVES THE GIRL. Women are people not trophies.

Jess almost 6 years ago
Enjoyed it, but disliked the message - why didn't Quasi deserve the girl?

Lizzie almost 7 years ago
What did I just watch?

Dorian Silenus almost 7 years ago
This film probably marks the start of the downfall of Disney animated films...

Morwenna Gentile 7 years ago
Ugly people deserve love too, but she decided to run off with the handsome one....

Dylan Clites over 7 years ago
The story is kinda sad for a Disney flick, but the gnomes make the whole thing worthwhile.

Michelle Roussell over 1 year ago
The Hunchback of Notre Dame is a 1996 American animated drama film produced by Walt Disney Feature Animation and released to theaters on June 21, 1996 by Walt Disney Pictures. The thirty-fourth animated feature in the Disney animated features canon, the film is inspired by Victor Hugo's novel of the same name. The plot centers on Quasimodo, the deformed bellringer of Notre Dame and his struggle to gain acceptance into society. The film was directed by Kirk Wise and Gary Trousdale and produced by Don Hahn. The songs for the film were composed by Alan Menken and written by Stephen Schwartz, and the film featured the voices of Tom Hulce, Demi Moore, Kevin Kline, Paul Kandel, Jason Alexander, Charles Kimbrough, David Ogden Stiers, Tony Jay, and Mary Wickes (in her final film role). It belongs to the era known as Disney Renaissance, which refers to the ten-year era between 1989 and 1999 when the Walt Disney Animation Studios returned to making successful animated films, recreating a public...
Read more on