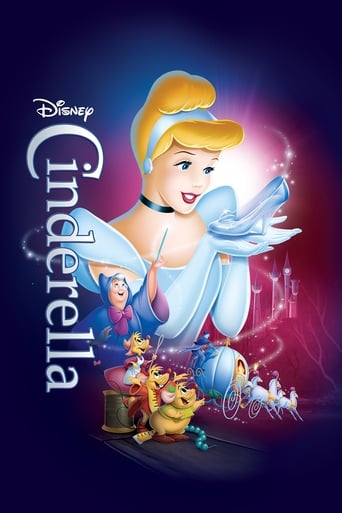 Lino Monteiro almost 5 years ago
Lovely as her name, Cinderella has and will continue to charm children and adults alike.

Ashley Beacom over 5 years ago
had never watched as a child, not as perfect as is made out

Ivan D'souza almost 7 years ago
Classic fairy tale, you know what to expect. Great fun for kids. Could've been better..

Chloe Robinson over 7 years ago
One of my favorite Disney movies when I was growing up!

Dylan Clites over 7 years ago
Huge Disney fan, but Cinderella never really did it for me. Kinda lacked any originality.

Jacqueline O 2 years ago
Cinderella is a 1950 American animated film produced by Walt Disney and based on the fairy tale "Cendrillon" by Charles Perrault. Twelfth in the Walt Disney Animated Classics series, the film had a limited release on February 15, 1950 by RKO Radio Pictures. Directing credits go to Clyde Geronimi, Hamilton Luske and Wilfred Jackson. Songs were written by Mack David, Jerry Livingston, and Al Hoffman. Songs in the film include "A Dream Is a Wish Your Heart Makes", "Bibbidi-Bobbidi-Boo", "So This Is Love", "Sing Sweet Nightingale", "The Work Song", and "Cinderella". Cinderella (Ilene Woods) is the much-loved only child of a widowed aristocrat. After deciding that his beloved daughter needs a mother's care, Cinderella's father marries a proud and haughty woman named Lady Tremaine (Eleanor Audley). She too has been married before, and has two daughters from her first marriage, Anastasia (Lucille Bliss) and Drizella (Rhoda Williams). Plain and socially awkward, these stepsisters are bitterly...
Read more on