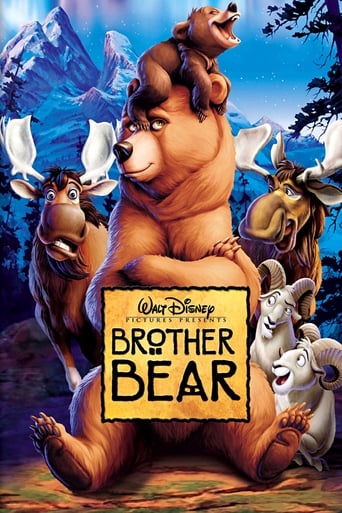 Randi Steers over 5 years ago
When an animated film can make you cry every single time you watch it, you know it's great

Kittypuff over 6 years ago
One of my favorite movies.Endearing and excellent story/plot

Dylan Clites almost 8 years ago
It's lacking that certain spark that makes a movie a classic, but it's still memorable fun

Blah Blah 2 years ago
Brother Bear is a 2003 American animated fantasy film produced by Walt Disney Feature Animation and released by Walt Disney Pictures, the forty-fourth animated feature in the Walt Disney Animated Classics. In the film, an Inuit boy pursues a bear in revenge for a battle that he provoked in which his oldest brother is killed. He tracks down the bear and kills it, but the Spirits, angered by this needless death, change the boy into a bear himself as punishment. Originally titled Bears, it was the third and final Disney animated feature produced primarily by the Feature Animation studio at Disney-MGM Studios in Orlando, Florida; the studio was shut down in March 2004, not long after the release of this film in favor of computer animated features. The film received an Academy Award nomination for Best Animated Feature, but lost to Finding Nemo. A sequel, Brother Bear 2 was released on August 29, 2006. The film is set in a post-ice age North America, where the local tribesmen believe all...
Read more on