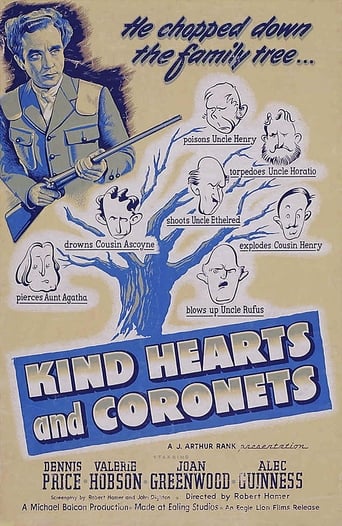 Robyn Hamilton 7 years ago
The dry witty script is what makes it.

Michael Kirk almost 8 years ago
Brilliant! Funny and dry and just the right amount of darkness.

Tim Jules Hull almost 8 years ago
The beautifully written story of a most amenable murderer.

Silke Bschek over 5 years ago

Amy Elle over 7 years ago

Dániel Rudolf over 7 years ago

James OD over 8 years ago
Kind Hearts and Coronets is a 1949 British black comedy feature film. The plot is loosely based on the 1907 novel Israel Rank: The Autobiography of a Criminal by Roy Horniman, with the screenplay written by Robert Hamer and John Dighton and the film directed by Hamer. The film's title derives from Tennyson's 1842 poem Lady Clara Vere de Vere: "Kind hearts are more than coronets, And simple faith than Norman blood." The film stars Dennis Price (Louis Mazzini), Alec Guinness (the D'Ascoyne family), Joan Greenwood (Sibella) and Valerie Hobson (Edith). Kind Hearts and Coronets is listed in Time magazine's top 100, and in the BFI Top 100 British films. In 2011, the film was digitally restored and re-released in selected British cinemas. Louis Mazzini (Dennis Price), the Duke of Chalfont, is in prison awaiting execution, and decides to write his memoirs. Shown in flashback, Louis is born in Edwardian England, the son of a woman from an aristocratic family (the D'Ascoynes) and an Italian...
Read more on