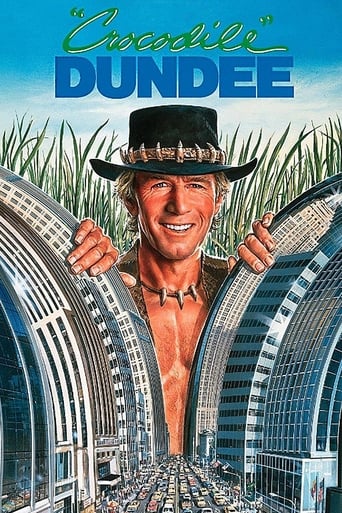 Daniel Lanciana over 3 years ago
Shallow version of the non-American original.

Sasha almost 6 years ago
Doesn't loose its charm. The Australian cinematography is beautiful!

Pamela Murray over 2 years ago

Dan over 3 years ago

Richard Sebastian over 3 years ago

andre bernier over 3 years ago
"Crocodile" Dundee is a 1986 Australian comedy film set in the Australian Outback and in New York City. It stars Paul Hogan as the weathered Mick Dundee and Linda Kozlowski as Sue Charlton. Inspired by the true life exploits of Rodney Ansell, the film was made on a budget of under $10 million as a deliberate attempt to make a commercial Australian film that would appeal to a mainstream American audience, but proved to be a worldwide phenomenon. Released on 30 April 1986 in Australia, and on 26 September 1986 in the United States, it was the second-highest-grossing film in the United States in that year and went on to become the number-one film worldwide at the box office. There are two versions of the film: the Australian version, and the American/international version, the latter of which had much of the Australian slang replaced with more commonly understood terms, and was slightly shorter. The international version also changes the title to "Crocodile" Dundee, adding the quotation...
Read more on