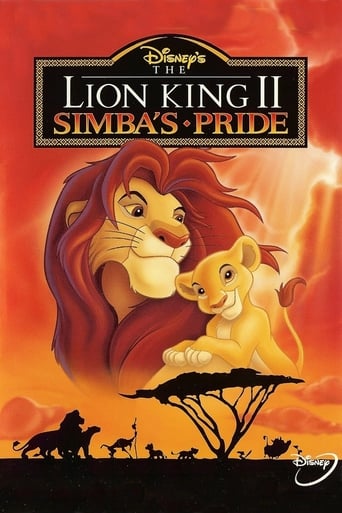 66
261
9
Rate this film
Add a review
Delete Rating/Review Share Add to queue
In your queue
Remove it
The Lion King 2: Simba's Pride 1998

Robyn Wilde 12 months ago
As animated sequels go (which is NOT WELL,) this one holds up better than most. Good music

Kiara Cunningham 6 years ago
alltime favorite movie petition to give it moreattention http://tinyurl.com/SimbasPridePet

Salena G 7 years ago
1 of my fav Disney movies. Great sequel and great on it's own. Potential to rival the 1st?

Renard Bansale over 7 years ago
A tightly-narrated, worthy, and appropriate follow-up to "THE LION KING".

Dylan Clites almost 8 years ago
As far as Disney sequels go, this is one of the best. Actually continues the story nicely.

India Glavey over 2 years ago

Lauren Armstrong over 2 years ago

Maxime Desroches Gauthier over 2 years ago

Sarah Taylor over 2 years ago

Loran Keyse over 2 years ago

Aleksa Ferreira over 2 years ago

Daniela Gómez Silva over 2 years ago
The Lion King II: Simba's Pride (later retitled The Lion King 2: Simba's Pride) is a 1998 American direct-to-video animated film released by Walt Disney Home Video on October 27, 1998. The film is the sequel to the 1994 Disney animated film The Lion King. It was later re-released as a special edition DVD (which altered the original title's "II" into "2") on August 31, 2004. It is the first film produced by DisneyToon Studios using Toon Boom. Based loosely on of Shakespeare's Romeo and Juliet, the film centers around Simba's daughter, Kiara, who falls in love with Kovu, a male lion who was raised in a pride of Scar's followers, the Outsiders. Desperate to be together, they must overcome the two obstacles that are keeping them apart: Kovu's mother, Zira, and Simba's prejudices against the Outlanders. Discussion began about the possibility of a sequel to the Lion King before the first movie even hit theaters. Most of the original cast reprised their roles from the first film, with the...
Read more on